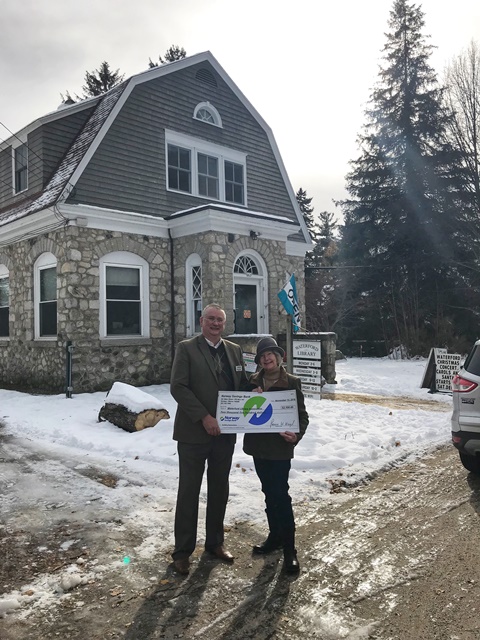 NORWAY, Maine – Norway Savings Bank has made a $2,500 donation to the Waterford (Maine) Library for the purpose of securing architectural designs necessary to make foundational ADA improvements to the building.

Designed and built in 1911, the Waterford Library displays a unique “Storybook” architectural character.  Noted Maine architect John Calvin Stevens, designed the original building.  After a severe fire in 1937, he redesigned the building with his son John Howard Stevens.

With ADA compliance in mind, Library Trustees chose Paul Stevens, of SMRT Architects of Portland, the great-grandson of John Calvin Stevens, to put together a comprehensive plan which will guarantee universal access.  Expanded meeting space will also be added.

“Without private businesses like Norway Savings Bank, our project would be on permanent hold,” said Geraldine O’Donnell, President of the Board of Trustees.  “Without these improvements, the Waterford Library would continue to be out of ADA compliance, which would not be an acceptable outcome.”

“We’re proud to work with the Waterford Library Association to maintain this gem of architectural history and true community resource,” said Patricia Weigel, President and CEO of Norway Savings Bank.