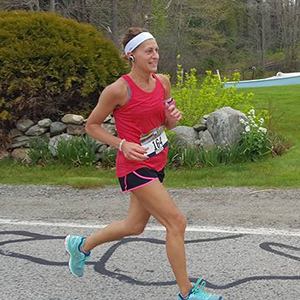 A teacher turned real estate agent turned banker, Kristen Charette has worked at many different places over the course of her career. But the past 5 years at Norway Savings, she says, have been special.

“It feels like family here,” she says. “Just shortly after I was hired I was at a company function and Pat Weigel, the bank president, came up and started talking to me. She knew exactly who I was — she knew my name. She even asked me how my grandkids were doing. It’s really unique how close-knit the people at Norway are.”

But her bank family (and her actual family) aren’t her only ones. Kristen also spends a significant amount of time with her a running family, both the Couch to 5k group that she coaches, as well as the girls she mentors through the running empowerment club Girls on the Run.

“I’ve been running for 10 years now,” says Kristen. “Two years ago I started a Couch to 5k running group in Fryeburg and 28 people signed up. By the end of the program, we had 38 people cross the finish line, the youngest was 12 and the oldest was 82. That really got me going.”

Her involvement in Girls on the Run came later, when a bank customer approached her about the program.

“In this, my first year with Girls on the Run, I was assigned a specific ‘running buddy’ and I trained and ran the whole race with her. It was so inspiring. I’ll definitely continue to participate in the future.”

Kristen also has one other very special running buddy – her dog, Tank.